Who Is the Mystery Hamptons Moneybags?

Who Is the Mystery Hamptons Moneybags?

The hunt is on for the New York mogul with questionable cash management skills.

Speculation bubbled on Wednesday after a receipt left hanging out of a Capital One ATM in East Hampton that displayed its ownerâ€™s remaining balance as $99,864,731.94 â€” yes, that would be $99 million and change â€”Â was posted on Dealbreaker.

The receipt, which appears to show a $400 cash withdrawal from a savings account plus a $2.75 ATM fee, was rumored to belong to the Appaloosa Management honcho David Tepper, who made billions during the housing collapse. 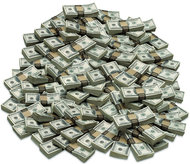