The Level of Value

Understanding this critical element in a buy-sell agreement

Traditionally, business appraisers retained for buy-sell agreements are bound to perform their services within the specific value structure of the contract. When the valuation process is involved in such agreements, itâ€™s essential for estate planners to understand the defining valuation elements involved, particularly the level of value.

We have preached for several years here at Mercer Capital that all businesses with more than one shareholder should have a current, well-written buy-sell agreement.

Business appraisers retained pursuant to the operation of buy-sell agreements are normally bound to prepare their valuations in accordance with the kind of value described or defined within the agreements. For clients with valuation processes as part of their agreements, it is imperative for estate planners to understand the six defining valuation elements of a valuation process agreement (as outlined in the book Buy-Sell Agreements for Closely Held and Family Business Owners by Z. Christopher Mercer).

This article deals with one of those defining elementsâ€”the level of value. Keep in mind that there is no such thing as â€śthe valueâ€ť of a closely held business. Confusion over an appraiserâ€™s basis of value, either by appraisers or by users of appraisal reports, can lead to the placing of inappropriately high or low values for a buy-sell agreement transaction. Therefore, it is essential that business appraisers and the parties using appraisals are aware of the correct basis (level) of value. Properly specifying the intended level of value provides a platform for appropriate and consistent valuation methodologies in deriving the conclusion of value.

â€śUnderstandably, business owners are often confused by or are totally unaware of the various levels of value.â€ť

The levels of value chart is an economic and financial model used by appraisers to describe the underlying financial behavior of individual owners and businesses in the process of buying and selling businesses and business interests. It summarizes a hierarchy of detailed facts and circumstances that characterize transactions involving particular business interests in specific situations. The model generally describes and organizes the valuation relationships that emerge from observing many thousands of individual transactions.

Understandably, business owners are often confused by or are totally unaware of the various levels of value. Business owners tend to think of value in terms of an â€śenterpriseâ€ť basis or perhaps a â€śsaleâ€ť basis. Valuation professionals look more at terminology like â€ścontrolling interestâ€ť basis or â€śminority interest.â€ť

The Levels of Value Charts

The levels of value chart has been an established model since the early 1990s. The original chart showed three levels, as indicated in Figure 1. 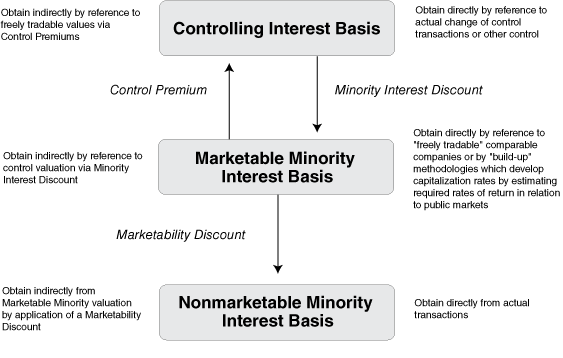 In current thinking, there are four conceptual levels of value as shown in Figure 2.

Many business appraisers believe that the marketable minority and the financial control levels of value are, if not synonymous, essentially the same.

One way of describing the financial control value is that buyers are willing to pay for the expected cash flows of enterprises and will pay no more than the marketable minority value. However, they may believe they can run a company better and if the competitive bidding situation requires that they share a portion of potential improvements with the seller, these two levels can diverge somewhat. 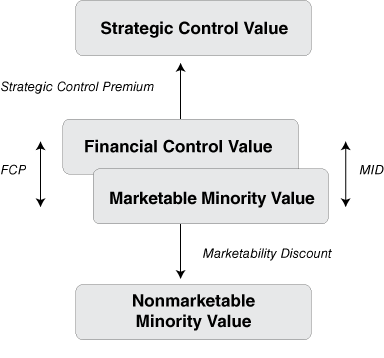 Recently, with the large influx of capital into private equity groups and hedge funds, competitive pressure for deals has caused some financial buyers to compete with strategic buyers. To do so, they must lower their expected rates of return, since strategic or synergistic cash flow benefits are not generally available to them.

Business appraisers look in part to the transaction markets for pricing guidelines when developing valuations at the strategic and financial control levels of value.

Business appraisers look to similar publicly traded companies, in part, to develop valuations at the marketable minority level of value.

The selection of the level of value, in conjunction with the standard of value, begins to specify a valuation or appraisal assignment of a particular business or business interest. Without looking at any numbers, it is clear that the strategic control level of value is higher (more valuable on a per-share or pro rata basis) than is the nonmarketable minority level of value.

In any multiple appraiser valuation process, if one appraiser believes that the appropriate level of value is strategic control and the other believes that the nonmarketable minority level of value is appropriate, the disparity in their conclusions will be wide. That is why business owners have to agree on these two important elements that help to specify the appraisals that will be performed based on their buy-sell agreements.

Practical Thoughts on the Levels of Value

Where there is a lack of understanding about valuation concepts, confusion will reign. Recall the old expression: â€śA picture is worth a thousand words.â€ť Hereâ€™s a word picture and then a visual picture.

Assume that a buy-sell agreement was triggered and the company was required to acquire a shareholderâ€™s shares per its terms. Unfortunately, the agreement had vague and confusing language regarding the level of value.

The company retained a well-qualified business appraiser, as did the shareholder. Under the terms of the agreement, each was required to provide a valuation.

The conclusions of value at each level of value are shown in Figure 3. Note that there is exact agreement on value at the financial control/marketable minority level.

Figure 3: Levels of Value in Action 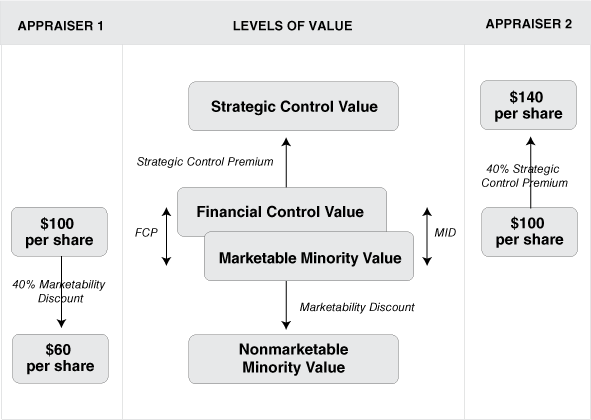 Note the dramatic difference in concluded values after reaching their respective final valuesâ€”$60 per share versus $140 per share.

The parties now have two appraisals. They are quite similar in many respects, but widely different in their respective conclusions of value. The visual picture raises several questions for consideration:

Suggestions for Specifying the Desired Level of Value

So, what level of value should be indicated in your clientâ€™s buy-sell agreement? There can be many reasons to select from any of the available levels of value, though we do observe that the financial control/marketable minority level of value should work as the most â€śfairâ€ť solution in many situations.

While the specific level of value decision will depend on specific circumstances, it is imperative for the owners of businesses drafting a buy-sell agreement to reach agreement on which level of value is desired. After coming to such agreement, the document should specifically refer to the appropriate level of value to eliminate any questions that appraisers, who are be retained at future trigger events, might have. It would be even more helpful to include a diagram of a levels of value chart in the agreement along with this reference.

This article was previously published on Mercer Capitalâ€™s website.

[author] [author_image timthumb=’on’]http://mercercapital.com/assets/Z-Christopher-Mercer-2012.jpg[/author_image] [author_info]Z. Christopher Mercer, ASA, CFA, ABARÂ is founder and CEO of Mercer Capital with offices in Memphis and Nashville, TN, and Louisville, KY.Â  In 2011, Chris was appointed to the International Valuation Professional Board of the International Valuation Standards Committee (IVSC).Â  He is also the author of seven books.Â  He can be reached atÂ mercer@mercercapital.com.[/author_info] [/author]