Compensation for PCPs is increasing

The increasing supply shortage of primary care physicians (PCPs) will have a significant impact on physician compensation. In turn; this will have an equally powerful effect on the valuation of PCP practices. 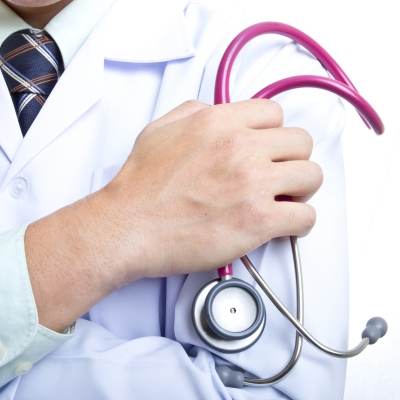 The U.S. is facing a significant supply shortage of primary care physicians (PCPs). According to a November 2013 study by the U.S. Department of Health and Human Services (HHS), the demand for PCPs will outpace the supply by approximately 20,400 physicians sometime between 2010 and 2020.1 Several factors influencing demand for PCPs include the aging baby boomer generation and provisions of the Affordable Care Act (ACA). Also contributing to the shortage is the fact that the number of available residency positions are not keeping pace with the number of medical school graduates, thereby limiting the pool of credentialed physicians. As a result of the PCP shortage, compensation for PCPs is increasing markedly, and we anticipate this trend will continue.

In 2011, the first of the baby boomers, those born between the years 1946 and 1964, turned 65. Representing an estimated 26 percent of the U.S. population2, the baby boomers have a tremendous influence on social, economic, and cultural trends on a national level. Their demands for medical services are no different. As the baby boom generation enters the golden years, servicing their medical needs will place a tremendous burden on the nationâ€™s health system. Projections by the Administration On Aging suggest the population of those aged 65 and over will increase 36 percent between 2010 and 2020.3 Alarmingly, the nationâ€™s supply of doctors does not meet this demand now, and given current trends, the gap will widen even further.

ACA was enacted by President Barack Obama in 2010 as a means to expand access to healthcare for all Americans while controlling its escalating costs. Several provisions within the ACA increase the demand for PCP services, as well as the attractiveness of PCP practices to acquisition by hospitals, such as

The increased demand and reimbursement for PCPs resulting from these provisions make PCP practices more attractive for acquisition by hospitals. As hospitals seek to become more clinically integrated and coordinate care for patients, they are increasingly targeting PCPs for employment or other alignment options. According to the Merritt Hawkinsâ€™ 2013 Review of Physician and Advanced Practitioner Recruiting Incentives, family physicians and general internists were the top two most requested physician search assignments for healthcare organizations, marking the seventh consecutive year that these two PCP types were the top search requests.

â€śThe increased demand and reimbursement for PCPs resulting from these provisions make PCP practices more attractive for acquisition by hospitals.â€ť

However, an outdated budget cap on Medicare support for graduate medical education means there has not been a meaningful increase in residency positions since 1997. Residency is a required component of physician education and is necessary for physicians to practice independently. The 2013 Main Residency Match published by the National Resident Matching Program reports that a record 40,335 people worldwide applied to 29,171 residency positions, while the number of U.S. medical school seniors without a residency position doubled from 262 in 2012 to 528 in 2013.5 According to AAMC, despite efforts to address the shortage, the country will see a deficiency of 62,900 physicians in just two years.6

Finally, within the field of primary care, HHS has currently designated 5,800 health profession shortage areas (HPSAs) within the United States. HHS defines a HPSA as an area with population-to-physician ratio of 3,500 or more. The Health Resources and Services Administration states that it would take an estimated 7,500 PCPs to fill this shortage.

A basic tenet of economics is that prices rise when demand outpaces supply. The PCP market, despite the regulatory burdens placed on them, is no different. As a result of accelerating demand and the limited supply of PCPs, compensation for PCPs has increased markedly in recent years as indicated in Figure I. Given current trends in the supply and demand for primary care medical services, we anticipate this trend will continue. 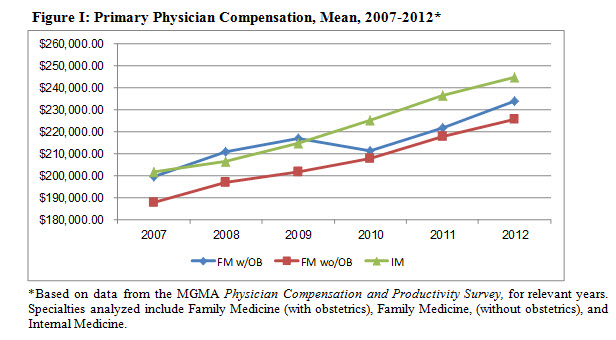 The dearth of PCPs represents an unprecedented challenge in meeting the future healthcare needs of the U.S. Numerous provisions of the ACA, including the Individual Insurance Mandate and ACOs, will potentially be significant drivers of demand for PCPs. Basic economic principles of supply and demand suggest a trend of expanding compensation for PCPs in the years ahead. Recent data has already shown an increase in PCP compensation levels, and we expect this trend to continue in the coming years.

1US Department of Health and Human Services, â€śPredicting the Supply and Demand for Primary Care Practitioners Through 2020,â€ť Health Resources and Services Administration, November 2013.