When the usual approaches won‚Äôt work

Technology and innovation expert and professor, Tim Swift, proposes an alternative to the traditional Market, Income, and Cost approaches to valuing a patent portfolio. 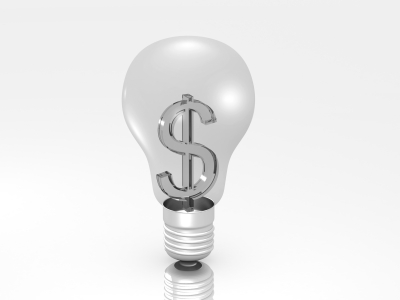 Patents held by the firm are often an important component of these intangible assets. Firms must account for this value on their balance sheets. This can be tricky. In recent litigation between Samsung and Apple, expert estimates of the value of Apple‚Äôs patents in question ranged from $38.4 million to $2.18 billion. Experts often must get creative when using data to support their valuation estimates. Under cross-examination, it was revealed that one expert‚Äôs evaluation incorporated reviews from customers, and that one of these customers claimed that the iPhone‚Äôs ‚ÄúSiri‚ÄĚ, an information search application, shot him with a gun.2

Common approaches to valuing patents include the Cost Approach, Income Approach, and Market Approach. Under the Cost Approach, we assign a value to the patent based on what it would cost to replace that patent. The Income Approach requires the valuation expert to estimate the incremental cash flows or cost savings attributable to the patent and calculate the present value of that income stream. Under the Market Approach, the valuation expert estimates the value of the focal patent by observing the prices paid for similar patents that have been bought and sold recently.

‚ÄúIn recent litigation between Samsung and Apple, expert estimates of the value of Apple‚Äôs patents in question ranged from $38.4 million to $2.18 billion!‚ÄĚ

All of these techniques assume that adequate data are available. As for the Cost Approach, we must know the current costs that the firm would incur to replace this patent. This is often difficult or impossible, because the innovation embedded in the focal patent is the only known way to perform a function. Similarly, the Income Approach requires that we can identify accurately the incremental economic impact the patent has on firm performance. The Market Approach assumes that there is an active market for similar patents‚ÄĒthis is often not the case.

My scholarly research in technology and innovation management has revealed to me a new way to determine the value of patents when the usual approaches won‚Äôt work. One of the first things I learned that surprised me greatly during my doctoral studies is that most patents are useless and have no value. So how do we determine which patents have value?

In a 2005 paper in the RAND Journal of Economics, Hall, Jaffe, and Trajtenberg showed that the number of citations that a firm‚Äôs patents receive is statistically and economically significantly related to the firm‚Äôs market value.3 Citations to a firm‚Äôs patents drive firm value.

However, we can‚Äôt simply count up the citations to a firm‚Äôs patents and crank away. In a 2001 paper published by the National Bureau of Economic Research, these same authors showed that not all patents are created equal.4 Newer patents cite more patents than older patents did. In some industries, patents cite many more prior patents than in other industries. Therefore, in order to compare the number of citations received by patents in different industries, or created at different points in time, we must adjust those patent citations for temporal and industry differences.

Let‚Äôs assume that we are required to determine the fair market value of the patent portfolio belonging to a hypothetical company X, which competes in the machine manufacturing industry (NAICS 333), and that the patents in this firm‚Äôs portfolio were granted in 2012.5 Data is not available to adequately estimate these patents using the traditional Cost, Income, or Market approaches. However, let‚Äôs consider a Modified Market Approach.

It is common for the valuation expert to be unable to locate patent sales that are directly comparable to the focal firm‚Äôs patent portfolio. It is often much easier to secure information on the value of patents held by other firms that are not directly comparable to the focal patents held by company X‚ÄĒin other words, patents from different industries, or granted in different years. Let‚Äôs assume we have patent and valuation data for three hypothetical firms: C, H, and T. C competes in the computer and electronic manufacturing industry (NAICS 334), H is in the automobile manufacturing industry (NAICS 336), and T competes in the pharmaceutical industry (NAICS 325). The traditional Market Approach would indicate that these data are not usable, because the patents with known values are from different industries, and the patents were granted in different years than those held by firm X. If we know the patent and citation counts of patents held by the benchmark firms, the values of the patent portfolios of these benchmark firms, and we know the U.S. Patent and Trademark Office (USPTO) patent numbers of the patents held by firm X, we can arrive at a valuation of firm X‚Äôs patent portfolio. 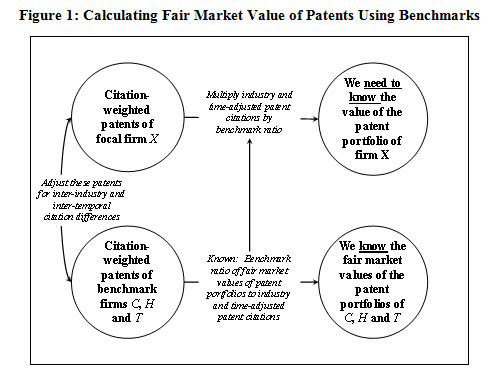 For the purposes of illustration, let‚Äôs use some hypothetical numbers.¬† If we know the fair market value of the patent portfolios held by companies C, H, and T, and the USPTO numbers assigned to each patent granted to all four companies, we can determine the following information through research:

Using industry databases, we can also determine the total number of patents granted and the total citations to those patents in each industry for each year.

Table 1 is a summary of the data we need on the benchmark patents from firms C, H and T.

Table 2 shows how we calculate a measure of firm-level patented knowledge that adjusts each firm‚Äôs patents for the year in which they were granted, and the industry in which they were granted, so that all firm‚Äôs patented knowledge can be used for benchmarking.¬† For each firm, we multiply the patents held by the firm (Column 2) by the citations those patents have received (Column 1), then multiply that product by the ratio of the number of citations that all patents in the firm‚Äôs industry, in the same year have received (Column 3) to the total number of patents granted in the firm‚Äôs industry, in the same year (Column 4).¬† Note that the fair market values of the benchmark firm‚Äôs patent portfolios are presented in Column 7.

We can now observe the ratio of the fair market value of these benchmark patent portfolios (Column 7) to this new measure of firm patented knowledge, adjusted for industry and temporal differences (Column 6).¬† ¬†These ratios are shown in Column 8.¬† ¬†The mean ratio of the three benchmark firms is $44.47; the median ratio is $46.32.¬† Since the mean is relatively close to the median, we can use the mean value in further analysis.

Using this new Modified Market Approach, the fair market value of firm X‚Äôs patent portfolio is estimated to be $11.05 million.

Note that we lacked adequate data to utilize the Cost or Income approaches to estimate the value of these patents held by firm X.¬† ¬†In addition, we lacked data on the sales of patents from the same industry or the same years, so the Market Approach to valuing these patents also was not feasible.¬† ¬†Using this Modified Market Approach, we arrive at a theoretically and empirically sound valuation of firm X‚Äôs patent portfolio.

Tim Swift, PhD, CVA, is an associate professor of strategic management, serving at St. Joseph‚Äôs University in Philadelphia, PA since 2008. He holds a PhD in strategic management, an MBA in financial management, and is a Certified Valuation Analyst (CVA). He has 14 years of senior management experience in the telecommunications and high-tech industries. He is also the proprietor of The Swift Group, LLC, a consulting firm that provides business valuation and strategic management consulting services. Dr. Swift‚Äôs research focuses on technology and innovation management. He has been published in the top academic journals in his field such as Strategic Management Journal and Research Policy. Mr. Swift can be contacted at (215) 499-7973 and also via e-mail at Prof.Tim.Swift@gmail.com.

5¬†For simplicity, let‚Äôs assume all of the firms‚Äô patents were granted in the same year.¬† This methodology can be applied when firms are granted patents across many years, but its exposition becomes cumbersome.